John came to us last spring looking for a career in the art industry. As a local artist who is passionate about pottery, he was having a difficult time turning his dream into a stable career with sustainable wages. 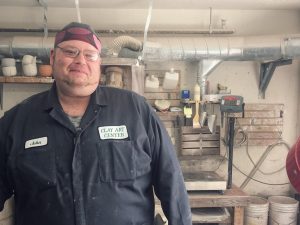 John started off working with AJ Soto and Josh Monroe in Spokane and later came to Pierce County in search of a new start.

John met with his new case manager, Kaitlyn Hanson, in the fall of 2017, and together they began brainstorming ways for him to follow his dreams of pursuing a career in the arts. John was struggling to find his place after his move from the east side and needed something quick that would help him to pay his bills. John began interning with a local non-profit with wages paid for by RISE, and later took on a second gig as a delivery driver for a local pizza shop. John juggled the two jobs for several months while he continued to seek out opportunities to advance within the creative community of Tacoma.

One day while John was out shopping for clay at a local clay-arts center, he began talking with the owner about his works as an artist. The two quickly hit it off, and by the end of the conversation John was offered a job in their shop. John later told his case manager that his social anxiety would not have allowed him to have this conversation a year ago.

John started the following week working as a Clay Master at the Clay Art Center in Puyallup, where he mixes and molds clay for local school districts and art studios across the country. Making $13.25 an hour and working 40 hours a week, John is able to pay his bills and reserve some of his income to continue to support his artwork. John is not only receiving full employee benefits at his new gig, but has also been given a stipend of 200lbs of clay for personal use each month. John’s employer encourages him to spend time after hours utilizing tools and workspace to support his creative needs as an artist.

“Without the people who’ve supported me in this program, I would not be where I am today. I was at the end of my rope when RISE found me, and Kaitlyn and AJ showed enthusiasm for my success that was infectious to the point where I actually began to believe in myself and become the person I’ve been fighting to be for so long. I am now an employed person who can helphis community and himself; that’s me. I am starting to feel like I have a great future ahead of me.”